HOT OFF THE PRESS!

For those of you that are avid readers of my blog (thanks Mom!) I wanted to make you aware of a kick butt new reference-architecture that VMware just released for large scale VMware Horizon View deployments.  Large in this case is 7000 concurrent Windows 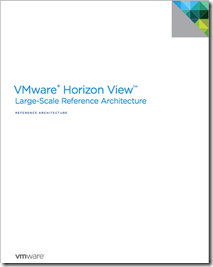 7 desktops. Special thanks to Itzik Reich (@itzikr ) for making me aware of this !

The reference architecture is based on a recently released VCE Vblock “Specialized System” Converged Infrastructure stack that was built with Cisco UCS “B” series blades, EMC XtremIO “X-Bricks”, and Isilon Nodes for user shares.  If you are not familiar with Vblocks, you can find more information here, here and here.  In a nutshell, if you are looking to deploy over 1000+ virtual desktops you’ve probably already realized that you are going to have to buy some infrastructure to support it.

A couple of things to take into consideration:

Prior to “all flash arrays” the vast majority of your infrastructure expense was on the storage side.  Fast forward to today, as flash arrays are becoming more prevalent in the industry, storage is slowly but surely becoming less and less expensive for these sorts of endeavors. 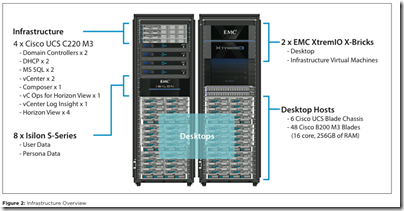 In this case, EMC’s XtremIO array is one of our “all flash arrays” and is well suited for Virtual Desktop deployments because of its performance and deduplication capabilities.  We only needed 2 X-Bricks to support these 7000 desktops whereas in the past it would have been numerous Hybrid Arrays.  By the way, today, the XtremIO X-Brick is considered “Directly Available” as opposed to “Generally available”.  The difference is we are being really particular around positioning this array for the right workloads and we are training all of our account teams and partners on where this is a good fit, vs. where it might not be.  The great news is, we have over 1.5PB of X-Bricks currently deployed in the field primarily focused on Virtual Desktops, high end transactional databases (OLTP), and other similar high performance environments.  As we get closer to our GA Date, we will take the training wheels off our sales teams and let’em loose!

In addition to storage, your other sizable investment will be server hardware.  For this 7000 “concurrent” solution, we were able to put about 150 Virtual Desktops per blade which comes out to be about 64 Desktop Compute blades.  That’s a LOT of server blades, and these are not wimpy blades.  These are the B200 M3’s with 256GB of RAM.  150 Desktops per blade is a good number to work towards so if your need is 1000 concurrent desktops, you would be looking at about 7 blades just for the desktops and probably another 2 or 3 for the infrastructure.

When you take into consideration the storage and the compute needs, it becomes pretty clear where the value of an “Appliance based approach” – like the Vblock – starts to make a ton of sense.  At 7000 desktops, the Vblock gets delivered as a self contained appliance with everything you need, including a single support number from the desktop down to the flash drives in the array.  Its about as close as you can get to making sure your deployment starts off without a hitch.  Did I mention this can be deployed into your Datacenter in less than 45 days, all wired, IP’d and ready to deploy your first desktop?  NICE!

BUT, if you aren’t interested in going down a VCE Vblock architecture route, you can certainly do this like any other application deployment and acquire the server, networking and storage as you’ve done in the past.  I’d just make sure to get an all flash based array like an XtremIO array, and work close with an integration company to make sure nothing falls through the cracks.

Either way, make sure you check out the reference architecture from VMware to give you more insight into things you need to consider for Virtual Desktop deployments.