Today with all the pomp and circumstance they rightly deserve VMware announced that vSphere 5 and all its wonderful glory will be “GA” (Generally Available) in August.  I thought I would write a short blog and call out some of the coolest features, at least to me, that will be in vSphere 5.

First and foremost, NO MORE SERVICE CONSOLE.  In other words, if you are not comfortable with the ESXi versions then now is the time to start working on that 🙂  vSphere 5 will be the first major update to not ship with a service console and that’s just fine by me !!  I’ve been running a clustered ESXi system on  USB sticks in my office and I couldn’t be happier.   In fact, ESXi installs in less than 1GB of space.  Finally get some use out of those outdated vendor USB sticks that only had 1GB or less !!

Speaking of booting from USB, I’m pretty excited about vSphere 5’s “Auto Deploy” feature.  AutoDeploy is a 100% Stateless install.  With Auto Deploy you no longer install ESXi on a hard drive or USB stick, it actually gets installed directly into memory!!  HOW COOL IS THAT!!  Couple that with Cisco UCS Service Profiles and you really can have a truly stateless installation of vSphere.  This is not just for customers that have 100’s of physical vSphere hosts, this is perfect for customers that are going to be adding physical servers or for those that are looking at VDI (Virtual Desktops) deployments above 500 desktops.  As you know, as you scale up Virtual Desktops that also scales up your physical servers and what better way to deploy them then with Auto Deploy.  I’m in the process of getting this setup in my home and will be blogging about the process.  I actually just picked up 2(ea) more Dell Optiplex systems to test this on.  CAN’T WAIT !!!

Another cool feature is Storage DRS or Storage Clusters and it ROCKS.  Essentially Storage DRS is just like Host DRS.  In vSphere 5 SDRS (StorageDRS) is called a Datastore Cluster.   It’s pretty easy to setup and get up and running: 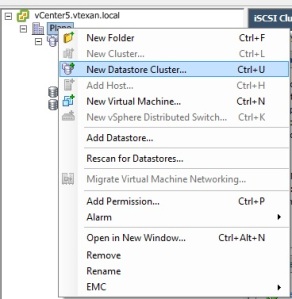 During the setup the Datastore Cluster wizard will ask you to set thresolds on the 2 metrics it monitors closely. 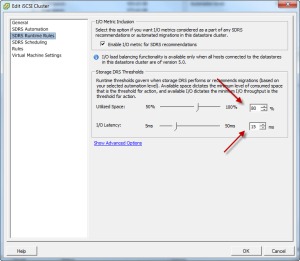 The first one is “Utilized Space” which monitors the %Full of your Datastore.  Once it hits your threshold, depending on if you’ve selected “Manual Mode” or “Fully Automated” it will either prompt you, or it will SvMotion your VM’s around to free up space.  I’ll go into more detail at a later date !!  The other thing it monitors is “I/O Latecency”.  It measures this in Milisecond response time.  By the way, Storage I/O Control is turned on by default so if you are not familiar with SIOC, you should read up on it.  It’s pretty cool.  When coupled with EMC’s Fully Automated Storage Tiering (FAST VP) you get a pretty cool ability to know that your data is in the right spot for your different types of workload.  With Datastore Clusters and EMC FAST VP you get 10 – 100X better granularity!!

A couple of other things to note:

vSphere HA was completely re-written and some of the changes look REALLY COOL.  I plan to blog about them in the coming weeks as I get more time to play around with it.  One of the use cases I’ve seen lately is in campus environments and splitting vSphere hosts between buildings.  With 4.1, and the right amount of vSphere Hosts you could essentially end up with all your “Primary” Servers in one location and all your secondary servers in the other.  As some of you know, you need to have at least one primary server in the other location or else if the site with all your “Primary’s” goes down (Site Failure), there is no one to promote a secondary server to primary.   In vSphere 5 the “Primary/Seconday” way of doing things goes away and is replaced with just 1 “Master Role” and everyone else is slaves.  I’m not saying this solves this particular usecase, but I think it can really help.  Like I said, I’ll go into more detail at a later date (and as I get more up to speed on it – gotta love a home lab for things like this 🙂 )

There are a couple of VAAI additions.  First one is Thin Provision Stun as well as Space Reclamation and I’ll go into more detail around this at a later date as well.

Finally VMware announced a new API called vSPhere Storage API for Storage Awareness (VASA for short).  The net-net is VASA is basically an extension of the vSphere Storage API’s, vCenter-based extensions.  It essentially allows storage arrays to integrate with vCenter for management functions via a server-side plug-ins or vendor providers.  Don’t confuse this with our Virtual Storage Integrator (VSI Plugin) that I’ve talked about in prior blogs.  This is an even deeper integration where vCenter could be aware of array based snapshot policies, what RAID levels the LUNS are on, are the compressed and deduped etc.  Imagine what sort of policies you could create if you had that sort of information available to you in vCenter.  You could almost create various different “Gold, Platinum, Tin” type profiles and deploy your OS’s and applications against those storage profile.  PRETTY COOL !!!

As you can see vSphere 5 is just jammed packed full of “Face melting AWESOMESAUCE” 🙂  As more information flows out of the team I’ll create another blog of some of the better vSphere 5 information to help cut down on your google searches 🙂  If you are an EMC Customer or Prospect and you would like more information on how we will integrate please reach out to your account executives and ask if they can bring a vSpecialst out to speak with you !!