So, this blog post is going to be a little different then my typical ones, but this is my blog so I get to publish whatever I want

About 10 months ago, April 11th to be exact, I was alerted by a good friend of mine (Brian Carpenter – @vtBrianC) of a kick ass Kickstarter Project called Pebble (http://getpebble.com/).  Pebble was a “Smart Watch”

and it was created by a couple of guys that had done a similar type watch for Blackberry.  They were seeking $100,000 to build an Apple iOS and Android capable “Smart Watch”.  They even had some mockups and a working proto-type and as with all Kickstarter projects, you could pledge different amounts of money and get different things.  In my case, I pledge $115 and I would get a Black Pebble Watch.  When all was said and done Pebble received over $10million from almost 70,000 backers in the 30 days they were on Kickstarter.  It has gone down as the most successful KickStarter project ever and I was really lucky to get in on the ground floor of it !! 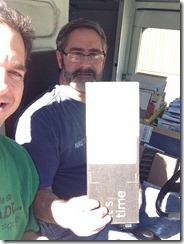 Fast forward 9 months, and about 4 months behind their posted schedule, I freaked out my poor mailman waiting for my watch to arrive outside of my house

Gotta love the expression on his face !!

So, I haven’t worn a watch in over 7 years and never really felt like I needed one.  UNTIL THE PEBBLE !!  This SmartWatch is just unbelievable. Here is just an idea as to what is under the covers of this watch.  It has a built in Accelerometer, an ARM Processor, Bluetooth 4.0, WaterProof to 5ATM, a Magnometer, a vibrating motor, and a really kick ass E-Paper

So Pebble is a fully customizable watch.  You can choose the types of watch faces you want to suit your needs.  It also connects to your iPhone or Android phone via Bluetooth and can display Caller ID, SMS/TXT messages, E-mails, Twitter and any other types of alerts your phone can send out.  Ya…I know…pretty freaking cool.  I’ve had my watch for a couple of days and I can’t stop smiling each time I get a txt message.  Imagine being able to read a txt on your watch and then deciding if you want to fish your phone out of your pocket to respond.  Better yet, if you get a phone call you can view the caller id and then you can decide if you want to answer it, end a call or dismiss a call, all without touching your phone.

of you that have cool stereo docking stations for your phone, another cool feature is the ability to control your iTunes music from the watch itself.  You can simply call up the Music app on the watch and you can play, pause and skip between songs and it gives you the name of the song, the artist and the album.  I also read on line that you can use it to pause movies that are playing on it as well (think AirSharing a movie to your Apple TV)

As with all 1.0 products and software, there has been a couple of nits.  Specifically if you walk away from your phone, and you go outside of the Bluetooth range it can sometimes take a few minutes to pair up and sometimes you have to kick it in the butt to do it.  My guess is this is more of an iOS issue then a pebble but I’m sure they can figure out a way to make it less of a problem.  Also, you will be spending a little time in Settings – Notifications (for Apple) making sure you have the proper notifications enabled (as well as sometimes you need to go in there as part of the butt kicking process).  One thing to keep in mind, you need to toggle “View in lock screen” mode if you want to see the message on your phone.  Also, if you get a lot of e-mail, you might want to re-consider enabling that feature.  I’m playing around with VIP status on my iPhone hoping that can help me narrow down the types of people I want to see e-mail messages from on my watch.  Honestly, I could care less about reading e-mail on it.  I really only want it for txt and caller id’s and Twitter “Mentions” have been nice to see as well. Another issue that I’m pretty sure is an Apple iOS issue is the “DoNotDistrurb” feature doesn’t seem to stop alerts from being sent to the watch.  This has caused me to not wear the watch while sleeping, just because I don’t want to get woken up by txt messages or other alerts at night.  My hope is this gets fixed somehow.

All in all, I couldn’t be more happy with this watch.  You know what’s really cool, if all it did was do Caller ID and Txt messages it would be the best watch ever, BUT they are going to

be rolling out “over the air” watch updates every 2 or 3 weeks with all sorts of added new features and functions.  They spent most of the last 9 months on the hardware, and now are shifting over to the software side so the potential for this watch is off the chart.  The one App integration I’m most excited about is the one they’ve been demo’ing lately which is integration with RunKeeper.  Imagine being able to see pace, distances, time etc on your watch while your iPhone is strapped to your arm.  VERY COOL !!

One more thing, another good friend of mine Matt Cowger has already hacked into the phone’s support file to glean some pretty cool information.  You can find his review here: Things I’ve learned about Pebble.  He never ceases to amaze me at what he can do with a very little time on his hands.

Anyway, if you are a geek/nerd or just like cool electronic devices you simply can not go wrong with getting a Pebble.  BUT be prepared to wait !!  The good news is I doubt your wait will be 10months like mine.  They did have almost 70,000 backers in less then 30days so they have a LOT of orders to clear out,  but my understanding is they are starting to ramp up production pretty quickly!

Okay, back to playing with VMware

oh who am I kidding – I’ll be playing with this watch for the next couple of days !

8 thoughts on “My Pebble Watch Review”