Whew…what a week !!  Crazy doesn’t even begin to explain how awesome this past week

was.  This marked my 2nd EMC World and the first one that I wasn’t locked inside the Hands On Labs so I actually had the opportunity to sit in some of the sessions, chat with customers and partners and really get a good view of EMC World.  I thought I would take some time to document out some of the things that’s stood out the most.

At EMC World 2011 the theme was “accelerating the Journey to Your Cloud” as well as “Cloud Meets big Data” and at EMC World 2012 it was “Transforming IT, Transforming Business and Transforming Yourself”.  I think the last count I saw was we had a little over 13,000 attendees and it felt every bit like 13,000 walking the halls of the Sands Expo center !!

One of the very coolest things about EMC World 2012 was the complete laser focus on the Social Media part of the event.  It was evident from the moment you picked up your name badge, if you had a twitter account, it was listed prominently on the badge.  This is a big deal for those of us that have embraced Social Media and twitter specifically.  The other thing is EMC TV captured most, if not all of the Keynotes and have made them freely available at EMCWorld.com.  I would encourage you to finish reading this blog and then head over to the site to check out !!

The first keynote I want to call out is Joe Tucci and Pat Gelsinger’s opening Keynote.  If you really want to get a great understanding of where EMC is going, this is the first thing you should watch ! – http://bcove.me/79xu8asw 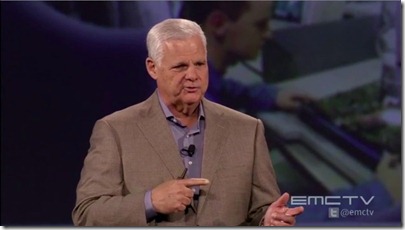 The next keynote I’d like to call out is Sanjay Mirchandani who is the CIO of EMC and probably one of the best CIO presenters I’ve seen.  I’ve actually never had an opportunity to hear him present on the EMC IT story and was really impressed with what our IT folks have been up to these last few years.  http://bcove.me/e1088w5u

His message was really geared towards how IT departments need to work on transforming themselves, sort of “future proofing” your skills as IT makes the move to more

of a services model.  In one of his slides he spoke about the last 7 or 8 years IT has really been focused on virtualizing as much as possible.  In other words, trying to reduce the physical nature of IT.  It was a mind set of each application needs physical servers and moving away from that took some time and focus.  Some of the lessons learned during that time was to focus on moving the applications and then re-tool them.  In other words, don’t do to much “change” at the same time.  Move it to virtual, and then deal with it was their motto.  It wasn’t just about Server and Application virtualization, it was also about looking at the different ways IT was delivering to their end users.  If the last 8 years was focused on virtualization, the next few years is about transformation using orchestration and automation tools and solutions.  If you can only watch one of these sessions, I would recommend Sanjay’s !!

Other really cool information that flowed out during EMC World was the 42 various product announcements.  One of my favorites was the

new VNX for vCenter Operations adapter.  For those of you that are familiar with vC OPS, you understand the value it brings to your virtual datacenter as well as the more information you can feed into it, the more valuable the monitoring tool can be.  In this case, we’ve moved what was a “Skunk Works” project, to a completely supported, and engineering backed up product.  Once again it shows the level of commitment EMC has with VMware and how important our integration is to our customers !!  For more information, check out the blog post over on VMware’s Site: http://blogs.vmware.com/vsphere/2012/05/tighter-integration-between-emc-vnx-storage-and-vmware-vcenter-operations-announced-today.html

Our brothers and sisters over at VCE had some nice announcements as well.   Jeramiah Dooley blogged about “VMAX 40K+Vblock = ((Powerful, Trusted, Smart) ^ More) – Risk” as well as “Vblock 300: Flexibility Without Risk” .  Both are great reads !!  As well as Aaron Delp over at his blog talking about: Announcing VCE’s Vblock Data Protection.

Rob Peglar (@Peglarr)  – Office of the CTO for Isilon blog about his experience at EMC World here: http://www.isilon.com/what-wonderful-world

Fellow Texan, and all around rockstar Nick Weaver (@Lynxbat) practically stole EMC World with his latest killer work: Lex Parsimoniae : Cloud Provisioning with a Razor – it’s a killer project and just an awesome job by Nick.

Not to be left out, Chuck Hollis (@ChuckHollis) once again published a slew of great information on some of releases and you can find them here:

Last, but certainty not least was the killer Hands on Lab’s that have become the “Go to” thing at EMC and VMworld’s.  This year completely blew away last years numbers and @DaverDFW’s Unisphere for VMAX lab was the clear #1.  Last count, I think the lab as a whole delivered over 3500 labs.  Chad wrote about this on his site: EMC World vLabs- Check it out !! – these labs are now gone, but the hope is to eventually figure out how to deliver these at the various events EMC puts on year around.  Fingers crossed on that !!

So, that’s just a short overview of the coolness that was EMC World 2012.  As I pointed out above, all the keynotes and various information can be found at www.EMCWorld.Com and a special shout out to Jeremy Burton (Chief Marketing Officer) and his whole team in delivering a KILLER show !!

Hoepfully, I’ll see most of you at VMworld this year in San Francisco but if not, I’ll see you guys next year at EMC World !!